6 Things You Didn’t Know About Stairlifts

6 Things You Didn’t Know About Stairlifts 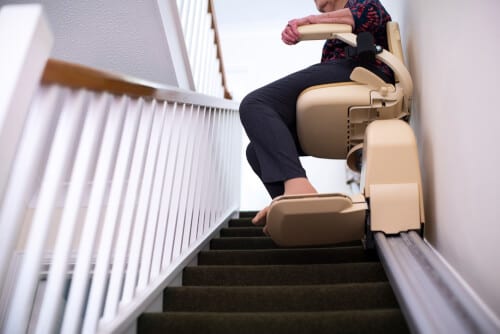 1 – Stairlifts aren’t as modern as you think!

When we think of stairlifts, we think about them being generally quite new in terms of age as they’re often stylised in a modern fashion. A lot of readers would be surprised in knowing that the first stairlift was actually invented in the 1920’s! A C.C. Crispen invited a tracked chair lift that would help someone up and down the stairs. Crispen’s invention is very much the precursor to the stairlift we know today. This prototype stairlift consisted of a foldable chair that moved along a track that was fitted to the stairs. It’s this system that has stuck over the past 90+ years and which has revolutionised stair aids in million’s of peoples homes today.

Stairlifts have actually been found as early as the 1500s during the Tudor era! Henry VIII had a rudimentary man-operated stairlift in his Whitehall Palace to help him up and down the stairs! Whether it was because of the notorious jousting injury he had at 45 or whether it was his 30 stone frame weighing him down, his use of a stairlift is one of the earliest recorded! There have even been earlier stairlifts noted but records of these are much looser in terms of accuracy.

3 – Stairlifts are much more efficient than you think

Stairlifts might seem like power intensive machines but in actual fact, they’re much more efficient than you think! They are comparable, if not more efficient than a lot of household appliances like kettles, microwaves and TV’s. Stairlifts are only designed to use power when it’s in use, not constantly in a “standby” mode. Studies show that most models of stairlifts are very affordable to run, costing less than £10 a year in electricity.

4 – Stairlifts are designed to last!

Stairlifts are mobility aids that are meant to last for years, if not decades. With the proper level of maintenance & servicing, stairlifts can keep running indefinitely! Stairlifts are generally very low stress in terms of the moving parts. Stairlifts usually last until they aren’t needed anymore which goes to show the longevity of their design. A quality stairlift from a professional manufacturer will be able to last for years.

Some sceptics may think that in the event of a power cut, a man or woman using a stairlift might be stranded in the middle of a staircase. You’d be right to be concerned about this potential issue, but you’ll be relieved to know it’s not a problem! Stairlifts are powered by the mains but the motor/chair itself is powered through a battery. In most, if not all stairlifts there is a charging contact at the top & bottom of the track so that no matter where the lift is, it can complete it’s journey regardless of the mains power.

Stairlifts can be seen as something that’s meant for the senior generation, however, in recent years this has shifted much more towards the younger generation as well. Stairlifts are not only for seniors with reduced mobility since reduced mobility isn’t just applicable to senior people. A sports injury or other health condition can render someone immobile which can mean stairs become impossible for someone to go up. Whether this is temporary or long term, this is a scenario that has to be overcome and a stairlift is one of the best fixes.

We’ve been providing professional stairlifts in London, High Wycombe, Oxford & Reading for the past 15+ years. We’re leading experts in the industry, ensuring that our customers are well informed through every step of the process. Visit our website for more information or speak to our advisors by calling the number on our homepage – Stairlifts London

Get In Touch Today

Call Now
We use cookies to personalise content and ads, to provide social media features and to analyse our traffic. We also share information about your use of our site with our social media, advertising and analytics partners who may combine it with other information that you’ve provided to them or that they’ve collected from your use of their services.
Accept
Change Settings
Cookie Box Settings
Cookie Box Settings

Decide which cookies you want to allow. You can change these settings at any time. However, this can result in some functions no longer being available. For information on deleting the cookies, please consult your browser’s help function. Learn more about the cookies we use.

With the slider, you can enable or disable different types of cookies: